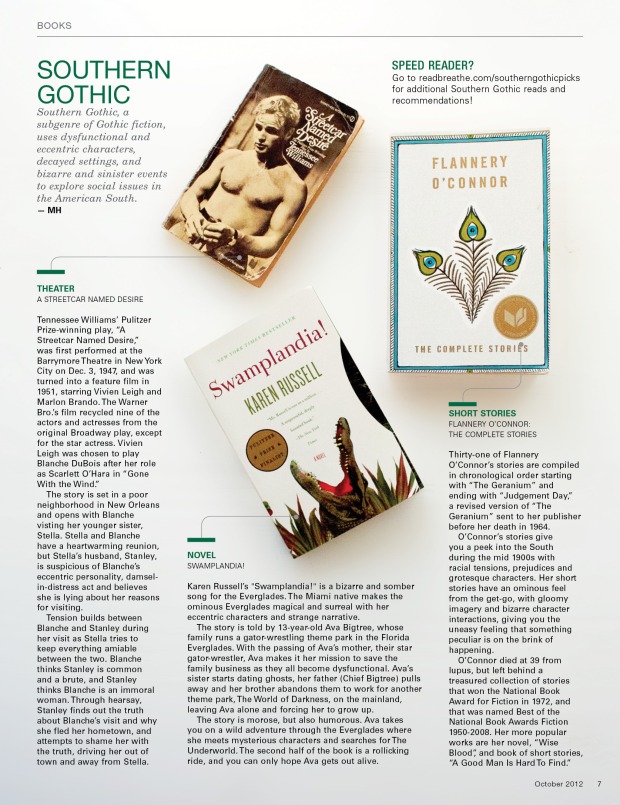 Unknowingly, I’ve been a fan of Southern Gothic literature since I was a little girl. I read Mark Twain, Harper Lee and Edgar Allan Poe as a kid, and remember getting chills from “The Tell-Tale Heart,” wishing Scout was my best friend and thinking Huck Finn was a real smart alec. Later, in high school, I ventured into Twain’s Complete Short Stories and started to understood that Twain wasn’t just a light read. His short stories evoked a range of emotions — laughter when reading “The Diary of Adam and Eve,” and feeling a sense of doom when reading about his Satan character in “The Mysterious Stranger.” Deep stuff, I thought.

As of lately, I found myself revisiting Southern Gothic lit through other classic authors — Flannery O’Connor and Tennessee Williams — while also exploring how authors like Karen Russell are incorporating elements of the genre into modern literature. It’s ignited this curiosity in me, causing me to dust off Twain’s short stories and buy Karen Russell’s latest book. I even ventured to request a copy of Russell’s Vampires in the Lemon Grove (to be released February 2013) to review for Breathe Mag’s January/February 2013 issue.

I have a slight infatuation with Russell’s books because they take place in the Everglades, which is right down the road from where I grew up in Florida. Her description of settings and characters resonate with me, and I feel a twisted attachment to the dark, gloomy — yet humorous — stories.

Because I’ve felt such an attachment to Southern Gothic lit lately, I decided to highlight three of the genre’s books in our October issue, keeping with the idea of the spooky South. Also, this week, I posted 20 Southern Gothic Book Picks on Breathe’s site — our extended reading list for those book worms out there.

Would love to hear what your favorites are off of Breathe’s 20 picks list — and what other Southern Gothic reads you’ve enjoyed lately. Happy reading!