Dorothy Draper was a woman ahead of her time. In an era when it was unheard of for women to have a career, Draper was a pioneer, paving the way for the interior design profession when she launched her own firm in 1923. Draper started a revolution not just in the interior design world, but for women by transforming and empowering the domestic space.

Draper eschewed the Victorian era’s dismal colors, period room styles, and formalities, instead embracing bright colors, bold motifs, and exaggerated details — something that was unheard of at the time. In the early 1900s after Draper married, she redecorated her home and her high-society friends took note of her fabulous style, asking her to spruce up their abodes as well. Over time, Draper’s hobby turned into an iconic and recognizable style, along with one of the most beloved interior design companies in the world.

What is now known as Dorothy Draper & Company was avant-garde at the time. Draper coined the term “modern baroque,” adding her special touch of glamour to classical designs. She was a design maximalist, applying exaggerated motifs and zippy colors, overlapping busy prints, and combining colors and patterns that weren’t ever seen before. Large prints and thick stripes were applied liberally to walls, bedspreads, and upholstered furniture. Although it was outlandish, her designs were well-received. They lifted spirits and inspired. “Lovely, clear colors have a vital effect on our mental health,” Draper once said.

Draper’s signature style is characterized by her use of cabbage rose chintz, white-and-black checkered floors, ornate white plasterwork, rococo scrollwork, and mirrors galore. Skillfully she mixed periods, such as Victorian with Baroque and Art Deco.  “If it looks right, it’s right,” she would say simply if a room looked aesthetically pleasing to the eye. 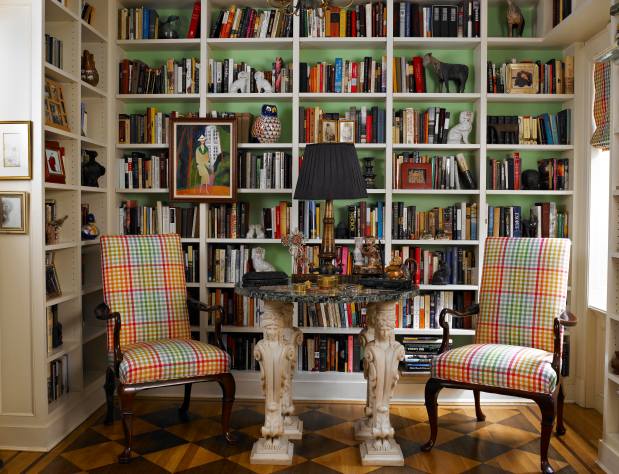 At The Greenbrier Resort in White Sulphur Springs, West Virginia, you can’t help but smile seeing the vibrant green palm tree leaf wallpaper paired with regal red carpeting, and Draper’s cheery oversized aqua, purple and green rhododendron chintz that is used extensively throughout. Draper redecorated the resort in the 1940s, breathing new life into the historic hotel, covering all aspects of the redesign down to the details of the menus and staff uniforms.

Her dramatic design became known as “the Draper touch,” and she was admired by suburban housewives across the country. Her “Ask Dorothy Draper” column ran in more than 70 newspapers during The Great Depression, and she would dole out decorative pearls of wisdom to those who wanted to adopt her style. At a time of poverty and sadness, Draper was telling women to infuse their homes with lively colors and happy motifs.

In 1944, Draper’s first pattern for the fabric and wallcovering company F. Schumacher & Co. was released — “Manor Rose”, an oversized vibrant chintz motif that is still available for purchase today. Her fabrics were in such demand by homemakers that Schumacher sold more than a million yards of her famous cabbage rose chintz.

Draper’s spaces are not just memorable but transformative. Entrances announce “you have arrived”  with bold plasterwork, while bedrooms are dreamy with romantic flowers, and dining rooms sparkle with eye-catching fixtures. 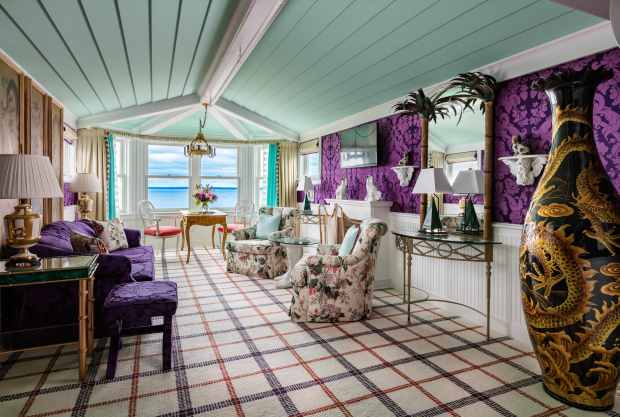 Today Draper’s dramatic designs can be seen at properties such as the restaurant at the Metropolitan Museum of Art (dubbed “The Dorotheum”), along with The Plaza Hotel and Carlyle Hotel in New York City. Dorothy Draper & Co. also is known for its interior design of castles and manors in Ireland, the Lithuanian Royal Palace, and the White House during the Carter administration.

“Draper was to decorating what Chanel was to fashion,” Draper’s protégé and the company’s current president Carleton Varney said. “She brought color into a world which was sad and dreary. Today, everyone wants color around them again.”

Since heading up the company, Varney has expanded Dorothy Draper & Co. to include Carleton V Ltd. along with and Dorothy Draper Fabric and Wallcoverings. Varney’s design philosophy echoes Draper’s with the use of bright colors and forbidding all things dim and banal. Varney, along with his right-hand man, Brinsley Matthews, are carrying on the traditions that Draper started nearly 100 years ago. 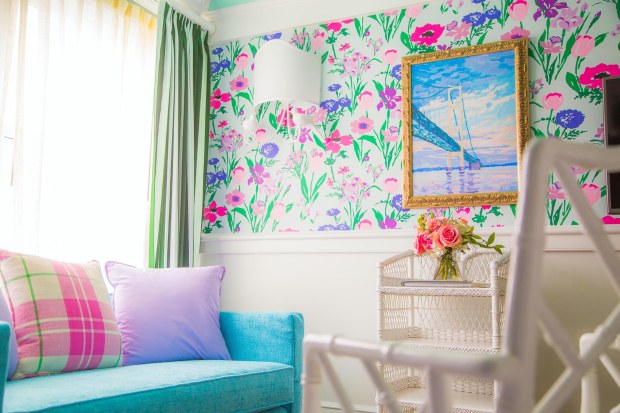 “We are as busy as ever, just as busy as Ms. Draper was in her day,” says Matthews, executive vice president and director of design and operations at Dorothy Draper & Co. “We still have all the components and ingredients, and still do original design and industrial design. And then there’s the fabrics and wallpapers. We are always creating new designs for lighting, fabric, and china.”

The design firm has decorated more than 300 hotels across the world, recently finishing Palm Beach’s Colony Hotel, The Grand Hotel’s new Coupla Suites, along with The Greenbrier’s new Wedding Salon.

“When we do hotels, we do the buttons on the uniforms and matchbooks and stationery,” says Matthews of the level of aesthetic attention paid to all aspects of their projects. “Our customers love attention to detail. Your biggest mistake is to underestimate someone. We all know details and appreciate details.”

Known for their deliberate use of unexpected color combinations, Dorothy Draper & Co. has established a paint line with Fine Paints of Europe with colors like the soft Hampton Meadow Lawn green and vibrant marigold Presidential Yellow.

And recently the company completed luxury homes in Palm Beach and New York. Previously, the privates residences they have decorated include the likes of Joan Crawford, Judy Garland, and golf pro Sam Sneed.

HOW TO “DRAPERIZE” YOUR HOME

1. Don’t forget the ceiling. According to Draper, there are five walls in a home, and the ceiling should not be neglected. Matthews advises painting ceilings in soft pastel colors.

2. Check your floors. Black-and-white patterned floors are a signature design element of Draper. She would use large-scale 22-inch square tiles to execute her checkerboard look.

3. Go bright or go home. “All our colors are fresh,” says Matthews. “Ms. Draper always used bright, clear colors.” Matthews recommends using colors that are reminiscent of springtime, when everything is alive and vibrant.

4. Just say “no” to beige. “Beige is the one color we don’t do. It isn’t an option,” says Matthews. “Ms. Draper used to say, ‘Show me nothing that looks like gravy.’” Beige can work as a minor secondary color, but Matthews warns against leaning on the color and applying it liberally. “It’s like quicksand. There’s no getting away from it then!”

6. Black is the new black. “Always add a touch of black to a room because it anchors the room,” says Matthews. Try a black coffee table or side table. And remember, all you need is a touch.

7. Scale is key. Matthews advices to keep scale in mind when decorating rooms. For instance, large rooms call for large prints. Common rooms at The Greenbrier and Grand Hotel are wallpapered in 15-inch and 20-inch stripes.

8. Define doorways. “Entrances to rooms are always lavish,” says Matthews of Draper’s doorways, which were embellished with lavish white plasterwork. “It creates a lovely announcement.”

9. Create a focal point. It’s important to have large-scale focal point in a room, which can be a window, piece of art, sofa, or even a mirror. If using a mirror, Matthews says it must reflect something interesting.

10. Mix it up. Mixing and matching fabrics is one of Draper’s signature looks. Matthews recommending mixing several patterns, such as bold chintz, and then using a striped fabric or wallpaper as a common denominator.

For the Dorothy Draper fans who are interested in furthering their interior design education, the design firm has launched their own decorating school, where they generously dole out design tips.

The program is hosted at The Grand Hotel on the weekend of June 21 through 23, 2019 and through two design sessions hosted by Carlton Varney himself guests learn how to solve their home decorating dilemmas. While learning about Dorothy Draper’s style, participants also are educated on how to create beautiful, bold, and balanced spaces for their home.

One thought on “Interior Icon: Dorothy Draper Past + Present”