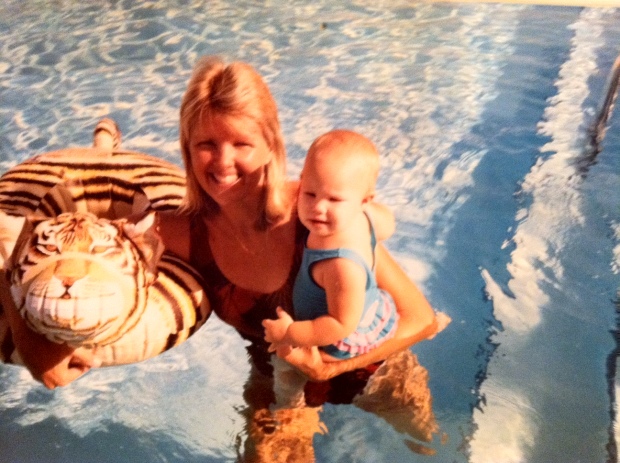 When people ask me about my mom, I always brag to them about what a talented artist she is. Her oil paintings are stunning and she can easily pick up other media. I remember when I was a kid she took a few water color classes and came home with masterpieces in the first week or two. I have a few of her smaller paintings in my house, as well as the funky silver jewelry she made in college. She is truly talented and I love being surrounded by her artwork because it’s a way of keeping her with me since I don’t see her nearly as much as I wish. My mom studied art in college, and after graduating used her artistic talents to become a graphic designer while also keeping up her painting on the side.

In the ’70s and ’80s my mom worked as a designer for an advertising agency in Naples, Fla. where she did work for Gulfshore Life Magazine. She tells me stories about how complicated and mechanical magazine and ad design was back in the day, and then I shoot back with stories about the wonders of InDesign and my favorite tools (definitely the eyedropper!). I never considered how tedious graphic design used to be until becoming fluent in Quark and InDesign and then hearing about what it was like to keyline and paste up before computers existed.

“We had these long belts; they were like a yard long. They each had different type styles and sizes,” my mom says. “It was so difficult compared to what you guys do today.”

My mom would take these long belts with different fonts and sizes and would put them into a machine that was 3 feet wide and she would sit at its mini desk and type out stories.

“I would have to put this big font belt on the type setting machine for the [text] body if I wanted 10-point type and I’d type the article up on it. And then if I wanted the headline to be 16-point type, I’d have to put another big belt on the machine and type out a four or five word headline,” she said. “For each size you’d need a different belt.”

After typesetting the body of the article she would melt wax and roll it on the backside of the type and paste it on each page of the magazine and send it off to the printer.

“You would literally have to cut and paste it,” she says. “Each page that went to the printer would have a separate page that I would have to paste the type on to.”

It was a long and involved process, and if a client wanted changes she then had to redo it all over again. If there were changes to text, she would reset the machine and retype it, cut the old lines from the article with a small blade and then repaste the new line into the text with the wax roller.

She would blue line in an area for images and then would paste her type around it on the page. She also did ad layout for the magazine and would typeset and paste ads onto the page. For borders around ads, she used a roll of border tape that came in different widths to outline each ad by hand.

“It was just a long, tedious process,” she says. “Wish I lived in the days of computers back then.”

It’s amazing to think of the patience and time spent keylining. I asked my mom how long it took to lay out one page and she just sighed and said, “A long time.”

When I think about designing now, I realize that I design anywhere between six to 14 pages in a workday depending on the newspaper(s) I am working on. I think about how easy it is to flow in ads, and when they don’t flow in how easy it is to throw a pdf on the page and send it to print. I am so thankful for “control + z” (undo function), and the ability to use it an infinite amount of times. With keylining there was no “control + z.” Everything had to be redone by hand.

I find it cool and funny that my mom and I had similar jobs but in different time periods. She is an artist and I am a writer, but somehow we both ended up doing page design for publications. I like that we have that in common.

When I think about my mom and the role she has had in my life, she has always been the mom to let me figure things out on my own. Never has she forced me in any direction (although she does give guidance), but I find it funny that I naturally gravitated towards designing as she did too. I am a natural born writer and editor, but I have to say that I have enjoyed my stint as a page designer. It has allowed me to understand journalism on an entirely new level — and I love that. And, I love that I have page design in common with my mom.